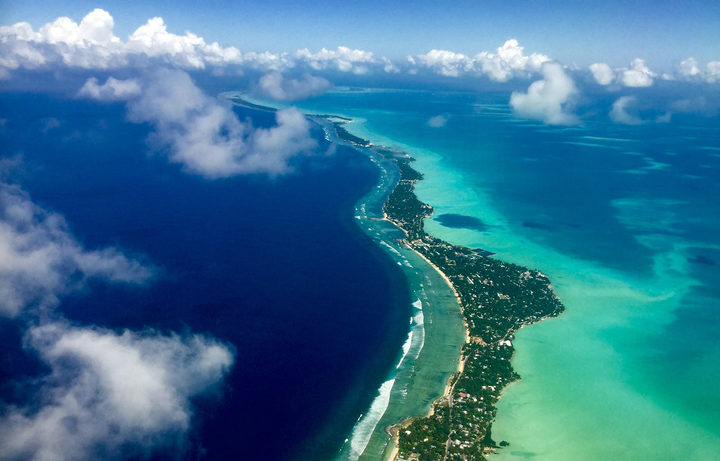 The Republic of Kiribati comprises 32 atolls and reef islands and one raised coral island divided into three groupings: Tungaru/The Gilbert Islands, The Rawaki/Phoenix Islands and the Line Islands. These islands lie in the middle of a triangle between the Philippines, Hawaii and Australia.

Kiribati is the only country in the that is spread into all four quadrants of the world (North, East, South and West.)

Banaba is the most westerly Island and it looks like this:

Teraina is the most northerly:

Caroline Island is the most easterly:

Flint Island is the most southerly:

Caroline Island is the easternmost point on Earth and one of the first to see the sunrise on Earth. (1) See it below in red:

The Gilbert archipelago is composed of five reef islands and eleven pure atolls. These are arranged in an approximately north-to-south line with some 780 Km. distance between the northernmost island, Makin and the most southernmost, Arorae. They consist of strips of land, nowhere more than 400 or so metres wide. (1)

The reef islands are called: Makin, Kuria, Nikunau, Tamana, and Arorae). They are slightly higher by no more than 5 m than the atolls.

Makin has a high annual rainfall, vegetation grows well on Makin, resulting in good fertile soil. Most of the important food crops such as coconut, giant taro, pandanus and breadfruit grow well without much need of cultivation. (2)

In case you did not read what an atoll was in my last post, an atoll defined by National Geographic “is a ring-shaped coral reef, island, or series of islets. An atoll surrounds a body of water called a lagoon.”

The atolls Aranuka, Maiana, Beru, and Onotoa have rlatively shallow lagoons (less than 10 meters) while Butari, Abaiang, Tarawa, Abemama, Nonouti and Tabiteuea have deeper lagoons (10 m or more), with Butaritari having the deepest at 33 meters. (1)

Banaba is a raised coral atoll, meaning it has been lifted high enough above sea leavel by tectonic forces that it protects it from scouring by storms. The highest point on this island is also the highest point in all Kiribati, at 81 meters. (1) To give you an idea of how tall… it’s only about 3/4 as long as a football field!

Sadly, this island was basically destroyed by mining… and not only this one. Many of these islands’ ecology was severely affected by World War II as well. More about this when we learn about its history… not looking forward to this at all.

This is a photo of the island of Banaba when it is not suffering of drought:

Beautiful huh? Well not all the time… this island has only about 300 hundred residents. Every 3 to 4 years the entire vegetation of the island dries out lasting for even two years! And the people basically starve! There is only one place to get water as well, a deep cave. You can read the incredible account of a person who has survived various droughts HERE.

The Phoenix Islands, or Rawaki, are a group of eight atolls and two submerged coral reefs that lie east of the Gilbert Islands and west of the Line Islands in the central Pacific Ocean, north of Samoa. They are part of the Republic of Kiribati. Their combined land area is 28 square kilometres (11 sq mi). The only island of any commercial importance is Kanton Island (also called Abariringa). The other islands are Enderbury, Rawaki (formerly Phoenix), Manra (formerly Sydney), Birnie, McKean, Nikumaroro (formerly Gardner), and Orona (formerly Hull).

The Phoenix Islands Protected Area, PIPA, established in 2008, is one of the world’s largest protected areas, and is home to about 120 species of coral and more than 500 species of fish. (2) It is absolutely beautiful there:

This is a movie made by PIPA. (Phoenix Island Protected Area agency.) When I watched it, I just wish there were more people who are native to these waters diving and enjoying the beauty of their home place, like all those researchers.

The Line Islands, Teraina Islands or Equatorial Islands (in Gilbertese, Aono Raina) are a chain of 11 atolls (with partially or fully enclosed lagoons) and coral islands (with a surrounding reef) in the central Pacific Ocean, south of the Hawaiian Islands.

The island chain stretches northwest to southeast across 2,350 kilometres (1,460 miles), making it one of the longest island chains in the world. One of the islands in the group, Kiritimati, has the largest land area of any atoll in the world. Of the 11 islands, all of which were formed by volcanic activity, only the Kiritimati and Tabuaeran atolls and Teraina Island have a permanent population.

Eight of these islands are part of Kiribati. The remaining three—Kingman Reef (which is largely submerged), Palmyra Island and Jarvis Island—are United States territories grouped with the United States Minor Outlying Islands.

Here are some of the very unique flora and fauna found on these islands:

I wish I could tell you that it all looks beautiful and natural, but this country has a very sad history of destruction… and these are some of the remnants…