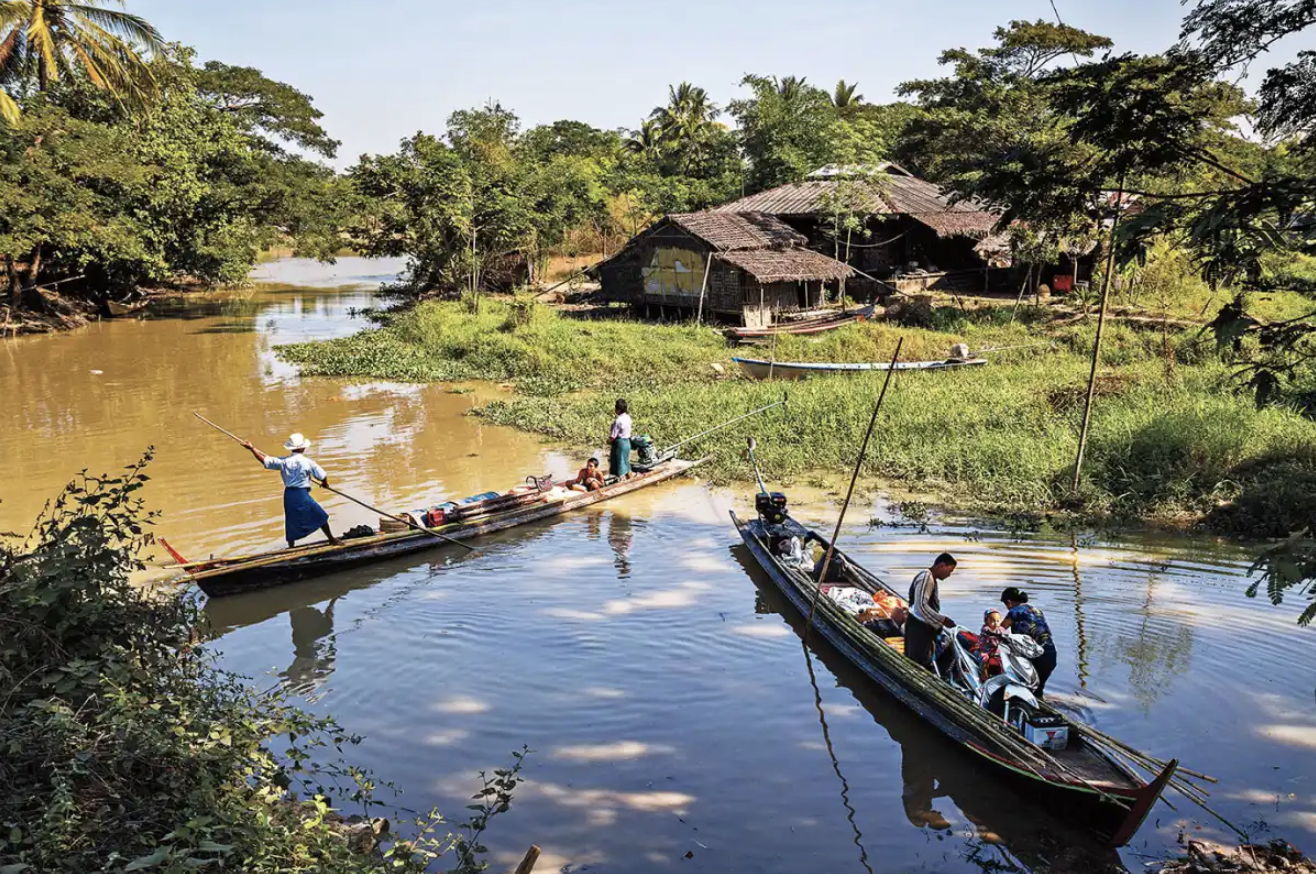 Myanmar is the northernmost country in Southeast Asia. Its shape looks a lot like a kite or a diamond with a handle. It is the second largest nation in Southeast Asia after Indonesia with 261,000 square miles (676,000 Sq Km). Myanmar’s neighbors are India and Bangladesh to the west, China to the northeast, Laos and Thailand to the south and the Andaman Sea and the Bay of Bengal to the south and southwest where Myanmar has 1,930 miles (1,200 Km) of contiguous coastline that opens to the Indian Ocean.

The region north of Mandalay is referred to as Upper Myanmar, while Yangon and the Ayeyarwady delta are Known as Lower Myanmar.

When I researched I found different approaches to the contrasting geography of Myanmar I decided to follow the regions as described in the book “Cultures of the World: Myanmar” by Cavendish Square publishers this year in its fourth edition. These regions are The Mountainous Northern and Western Regions, The Valleys and Plains of the Central Region, The Delta Region, the Shan Plateau, the The Long Tail and the Myeik Islands.

So now get ready to take flight to the north as we look at the first region:

The Mountainous Northern and Western Regions

The mountains in this area begin in the extreme north with a series of mountain ranges that have formed and keep rising higher and higher as the Indian-Australian Plate continues to collide with the southern edge of the Eurasian Plate and thrusting up the mountain ranges of Myanmar and beyond.  The highest mountain, the highest in Southeast Asia is called Mount Hkakabo Razi and it is 19,296 feet (5,881 m). It is part of the Himalayan chain of mountains. So yes, going north these mountains just get taller and taller!

One interesting fact that I found out was that for the longest time this mountain was considered the second highest mountain but against this belief a team sponsored by National Geographic actually set out with scientific instruments to proof that this was in fact the highest mountain in Southeast Asia. This mountain had long been overlooked and not actually climbed properly with scientific instruments. In the following videos you can see and feel how hard it is to climb a mountain like this one… the stories told by one of the female climbers. They were finally able to do it on their second attempt in 2014. Just so glad I get to this virtually in my pajama pants with a heater by my feet on this cold Bostonian night. ^ ^

HERE you can read about how they collected the data and these are some photos by Mark Fisher during the climb:

So thank you… incredible humans!!!

This region contains the sources of several of Asia’s great rivers, including the Irrawaddy, which rises and flows wholly within Myanmar, and the Salween (Thanlwin), which rises to the north in China. The upper courses of these rivers all flow through deep gorges within a short distance of each other, separated by steep, sheer peaks. Here you can see how long the Irrawaddy river is:

It is the Myanmar’s largest river and most important commercial waterway.

To the west is Rakhine State. It has a long coastal strip filled with beach resorts and many temples. The vegetation in this region varies from alpine forests to tropical as you go south. There are many species of plants like pine, birch, cherry trees, magnolia and rhododendron.

Also an area of Rakhine is covered by bamboo forests. Sadly I was not able to find a single ‘free’ image but here is one just under bamboo forests to get an idea:

Wild animals still survive in the mountains – bears, civet cats, elephants, leopards, and tigers to name a few. The rare takin, red panda, Malayan tapir, snow leopard and Sberian musk deer are found in the northern temperate forests, although some of these animals have been hunted to near extinction.

The Valleys and plains of the Central Region

This region is directly next to the Western mountains and is a mix of wet and dry areas. The wet areas are filled with river valleys and plains of the Ayeyarwady, the Chidwin (a tributary) and the Sittaung rivers. Low mountain ranges flank many of these river valleys. (1)

The basin is divided into two unequal parts, the larger Irrawaddy valley and the smaller Sittang valley, by the Bago Mountains. In the centre of the basin and structurally connected with the Bago Mountains and their northern extension is a line of extinct volcanoes with small crater lakes and eroded cones, the largest being Popa Hill, at 4,981 feet (1,518 m). (2)

In the dry zone, the flora turns into thorny trees, shrubs and cacti. Agricultural products such as pulses, cotton, onions, chilies, oilseeds and beans are grown here. Petroleum and natural gas are found here as well. Teak and other hard woods cover the slopes of the mountain ranges, while in the river valleys and plains the main crop is rice. Jute and sugarcane are also grown here. Fish and shrimp are bred in ponds and harvested from rivers and creeks.

The Ayeyarwady Delta—also called the Irrawaddy Delta covers 19,500 square miles (50,400 sq km) and it is a network of eight main streams and many creeks flowing into the Andaman Sea. It is Known as Myanmar’s rice bowl with 60 to 70 percent of the rice produced here. It is also famous for its production of fish and shrimp and derived products. This area is densely populated. (1)

Located in the east the Shan Plateau rises 3,000 feet (900m) from the Central Valley. This table land is about 2,742 feet (914 m) above sea level and forms a natural border with China, Laos and Thailand. Shan State is to the north of it and Kayah state to the southern part. The climate on the plateau is cool year round. Some parts of the Shan Plateau are rolling plains, while others parts are forested. The following three images come from a blog called “The Intrepid Traveler.” It looks so beautiful!

Cherry and pine trees grow wild here and many orchids can be found. One of them native to Myanmar is called the “blue vanda orchid.”

The Shan Plateau is drained by the Salween River, which enters Myanmar from southern China and empties into the Gulf of Martaban southeast of the Sittang. It is deeply entrenched and crosses the plateau in a series of deep gorges. Many of its tributaries are more than 300 miles (480 km) long and join the Salween in cascades. (2).

There is a lot of conflict with this river as dams have been planned that would destroy the supply of water to many indigenous communities.

“Dams on the Salween such as Hatgyi could damage the livelihoods of the millions who rely on the river. On the Thai side of the Salween, approximately 10,0000 indigenous Karen communities will feel the effects of the dam’s transboundary impacts. If the dam is built, the river will be altered, and as a result, their environment and livelihoods will be damaged and their community’s rights to natural resources will be violated.” (Earthrights.org)(3)

The long tail that extends down from the Shan Plateau to the Isthmus of Kra in the South of Myanmar is known as the Tanintharyi coastal strip. It has a narrow strip between the mountains and the sea that is well used for agriculture. The main crop grown here is rice and on a minor scale pineapple, durian, rambutan, mangosteen, tapioca, cashew nuts, betel nuts and coconut.

This is the location of the Tanintharyi coastal strip:

These are some images from this area:

This is durian, a fruit that smells a lot like garbage.

The Myeik (Mergui) Archipelago is a group of about 800 islands of the Tanintharyi coast opposite the town of Myeik. The people who live here are knowm for deep diving for pearls and abalone. They live on boats near the islands but move to the land in the rainy season. They were once feared as pirates of the Andaman Sea. (1)